ARGENTINA IN A NUTSHELL 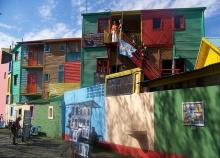 The name “Argentina” is derived from Latin “argentum”, which means plate. It is associated with the silver mountains legend, widespread among the first European explorers of the region, who also called River Plate to the great estuary that separates Buenos Aires from Uruguay.

The 1853 National Constitution included the term “Argentine Republic” among the official names to designate the country’s government and territory.

Argentina is one of the world’s southermost countries. It is located in the southern tip of the American continent and it further expands over a portion of the Antarctic continent, whose sovereignty is claimed.

Argentina borders Chile to the west, Bolivia and Paraguay to the north, Brasil, Uruguay and the Atlantic Ocean (from north to south) to the east, and the Drake Passage to the south. The country also has access to the Pacific Ocean through the Magellan Strait.

Of that surface, 2,780,400 km2 correspond to territory under effective sovereignty. The rest belongs to Malvinas, Georgias and South Sandwich Islands, over which Argentina demands exercise of sovereignty, given that they are currently occupied by the United Kingdom.

If considering only the land area within the American continent under effective sovereignty, Argentina is the world’s eighth largest country and Latin America’s second largest.

In addition, Argentina claims sovereignty over a portion of the Antarctic continent, which occupies since 1904 with permanent bases. Argentina’s Antarctic territory has an area of 965,597 km2.

The terrain of the Argentine territory is characterized basically by the presence of mountains in the west and plains, interspersed with hilly areas, to the east.

A mountainous range called the Andes, runs along the western edge of the Argentine territory from north to south and separates our country from Chile.

The Aconcagua mountain, located within the central segment of the Andes, is the highest peak in the American continent, reaching 6,960 metres high.

In the 16th century, the Spanish conquerors occupied most of the northern half of the Argentine territory, which thus became a colony of the Spanish Empire.

Before the independence declaration, since 1776, the current Argentine territory was part of the Viceroyalty of the River Plate, one of the five that Spain had created in the American continent. Each Viceroyalty was led by a Viceroy, who ruled on behalf of the Spanish King.

On May 25, 1810, taking advantage of the capture of King Fernando VII by Napoleon Bonaparte from France, a group of intellectuals around the River Plate area created in Buenos Aires the First Board of National Government, which was the first autonomous government.

This Board, which resulted in the emancipation from Spain, initially had a temporary nature, until the release of King Fernando VII.

However, this experience inevitably led to the declaration of independence by leaders from the different provinces, which took place on July 9, 1816, in the Northwestern city of Tucumán.

The first decades of Independence of Argentina were marked by civil wars between two groups: unitarians and federals.

While the former advocated a centralized government ruled by Buenos Aires, the latter sought a decentralized system which preserved the autonomy of the provinces.

In 1853, the National Constitution was finally adopted, and it established a republican, representative and federal government system, which ensured the autonomy of the provinces.

From 1880 to 1930, the formation of the modern Argentine state took place. The Patagonia was occupied and the capacity to control the entire territory by the state was attained. Buenos Aires was designated the country’s capital city and free, secular and compulsory public education was established. In addition, legislation was passed establishing an electoral system based on universal, mandatory and secret voting.

During this period Argentina experienced an explosive economic growth and received a number of immigrants coming from different European countries, which redefines the population profile.

From 1930 to 1983 Argentina went through a period of high political instability, with democratic governments that alternated with dictatorships that result from coups. The last dictatorship lasted from 1976 to 1983, leaving a balance of 30,000 missing people and crippling indebtedness.

Nevertheless, a significant industrialization process also took place in this period, particularly in the decades of 1950 and 1960, as well as high scientific development, a quality university system and a society with high levels of equality, built on the principle of social mobility.

From 1983 until today, the country went through a process of consolidation of democratic institutions, prosecution and conviction of those responsible for the crimes committed by the military dictatorship and resolution of the external debt carried over from the dictatorship.

The Argentine Constitution, as sanctioned in 1853, adopts the federal, republican and representative form of government.

At the national level (national government) there is a division of powers, each of which is independent from the others: the executive branch (led by the President), the legislative branch (exercised by the National Congress) and the judiciary (led by the Supreme Court of Justice).

In turn, in each of the provinces, the same tripartite division of powers is replicated: the executive branch (led by a Governor), the legislative branch (exercised by a provincial Legislature) and the judiciary (led by a High Court of Justice).

At national level (national government) the elections for President are held every four years, whereas elections for members of the National Congress take place every two years.

The current Argentine President is Mr. Mauricio Macri (2015-2019), which ended up winning the run-off of the latest presidential election, which were held on November 22, 2015.

Argentina’s economy is the third largest in Latin America after Brazil and Mexico and, along with these two nations, Argentina is one of the three Latin American member countries of the G-20, which comprises the 20 largest economies in the world.

Argentina is the world’s largest producer of sunflower, yerba mate, lemon and soybean oil, the second for honey and apple, the third for soybean and the fifth for wine. It is also a major producer of meat, wheat, wool, bio-fuels, gas and oil.

The Argentine economy benefits from an abundance of natural resources, a highly educated population, a modern export-oriented agricultural system and a major industrial base.

The biggest industrial hubs are, in order of importance, Córdoba, Greater Buenos Aires and Rosario.

Argentina has a number of renowned public and private institutions dedicated to the development of science and technology, some of which have more than half a century of experience and international recognition.

Numerous Argentine scientists and researchers have been awarded by the world’s most renowned scientific institutions, including three Nobel Prize winners: Bernardo Houssay (Physiology and Medicine, 1947), Luis Leloir (Chemistry, 1970) and César Milstein (Physiology and Medicine, 1984). Thus, Argentina has the largest number of Nobel Prizes in Latin America and ranks 4th among developing countries worldwide.

The Argentine nuclear program, led by CNEA, emerged as a result of the reliance on the development of the country’s own nuclear technology instead of importing it from abroad. In 1957 Argentina became Latin America’s first country to develop a nuclear reactor using local technology, and 1974 it became the first to put a nuclear plant into operation: Atucha I. Argentina has exported nuclear technology to countries such as Algeria, Australia, Egypt and Perú.

Argentina’s current population is 41.1 million inhabitants (49% men and 51% women). The population density is 15 people per km2, well below the world average of 50 people.

Argentina has a high rate of urbanization with 92% of the population living in metropolitan areas. Buenos Aires is the most populated city, which 3 million inhabitants, followed by Córdoba and Rosario, both with around 1.3 million each.

The demographic profile is relatively young, with a median age of 29.8 years old. The population growth rate is 0.9% annually, one of the lowest in Latin America.

Argentina is known as a "country of immigrants" since most Argentines descend from immigrants from different European countries (Italy, Spain, France, Germany, etc) who arrived in the country during the second great wave of immigration, which lasted roughly from 1880 to 1930.

Throughout the second half of the 20th century, Argentina received new immigration flows from the Middle East (mainly Syria and Lebanon) and Asia (mainly China, but also Korea and Japan).

In addition, the aboriginal peoples, gathered in different communities, managed to keep alive to this day some of their ancient traditions.

Almost all Argentines speak Spanish. Given the expanse of the Argentine territory, the Spanish language presents regional variations, but the predominant dialect is the River Plate Spanish, spoken in the River Plate basin and nearby provinces.

In Argentina there is no official religion and the National Constitution guarantees freedom of worship.

While about 70% of Argentines define themselves as Catholic, there are over 4,500 religions registered under the National Registry of Worships.

Besides, Argentina is home to the largest Muslim and Jewish communities in Latin America.

Do you want to know more about Argentina? Check out this official brochure with more information.