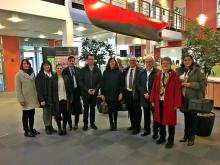 Ambassador Nélida María Contreras de Ecker visited Gävle on 2nd of November, during which she had a lunch with the Rector of the University of Gävle and authorities of the University. Then a working table was held in which the decision to promote cooperation with Argentine universities was made.

The visit ended at the new biogas plant of Gästrike Ekogas AB in Forsbacka guided by Thomas Nylund, CEO of the company Gästrike Återvinnare and his team, where the functioning of the plant was explained and different opportunities to cooperate with Argentina were discussed.