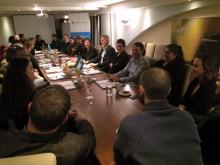 On October 24th and 25th, Ambassador Mrs. Nélida Contreras de Ecker made her first official visit to the Västra Götaland Province, which began with a meeting with the Argentinean community living in and around Gothenburg.

As part of her visit, the Ambassador was greeted with a welcome lunch by the President of the Provincial Assembly of Västra Götaland (VGR), Mr. Magnus Berntsson, and the Minister of Cultural Management of the Province, Mr. Staffan Rydén, at the Gothenburg Opera.

Meetings were held with authorities from the University of Gothenburg and a trade delegation formed by representatives from the Province Export Center, the Västra Götaland Chamber of Commerce and Business Sweden.

At the end of the day, the Mayor of the City of Gothenburg, Mrs. Lena Malm received the Ambassador at the City Hall.