DAYS OF ARGENTINE CULTURE IN GOTHENBURG 2017 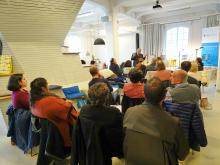 Between Thursday 28th of September and Sunday 1st of October, the "Days of Argentine Culture 2017" took place in different cultural institutions in Gothenburg.

The Argentine films "Yo soy asi, Tita de Buenos Aires", "Mater" and "The Sacrifice of Nahuen Puyelli", the film talk titled "Mater: The Birth of the Human Being of the 21st Century", the workshop "Creative Writing for Everyone" by the Argentine writer Jesús López, the Argentinian folk musical performance by " Union de las almas" and a tasting of typical Argentine food and "Ecologica" wines from La Rioja were presented.

The Embassy of the Argentine Republic thanks in particular the participation of all the attendees and the association "Cine en Español", the cinema "Hagabion", the cultural space "Litteraturhus" and "Giertz Vinimport".