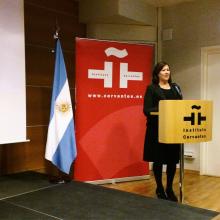 The Argentine Embassy in Sweden participated with two screenings at the "VI Iberoamerican Cultures Festival" at Instituto Cervantes on May 15, 2017. The short film "Vuelvo al sur" (Back to the south) by Gufran al-Nadaf was screened first, followed by the film "Camino a La Paz" (Road to La Paz) by Francisco Varone. More than a hundred people enjoyed this double film session and a tasting of the Argentine "Ecológica Shiraz Malbec" wine was held after the screenings. We want to thank the audience for joining us and send our special thanks to Instituto Cervantes and "Giertz Vinimport" for their kind collaboration.