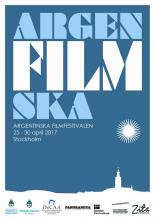 ARGENFILMSKA – the Argentine Film Festival – took place at Stockholm from April 25 to 30. The event was arranged by the Argentine Embassy in Sweden with the collaboration of Argentina's Ministry of Culture, the National Film Institute (INCAA) and Latin American Film Festival "Panorámica". Six Argentine films were screened at different cinemas and, in addition, two worshops on Argentine literature were held during the week. We want to thank all those who joined us and supported this unprecedented event.