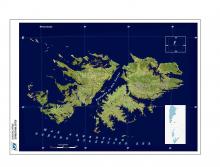 On January 3rd 1833, the Malvinas Islands, an integral part of the Argentine national territory, were illegally occupied by military forces of the United Kingdom.

The Argentine Republic, as legitimate heir to the archipelagos and maritime areas of the South Atlantic that had belonged to Spain, expressed through government acts its strong will to recover its effective sovereignty over them.

The United Nations recognize that the Malvinas Islands are subjected to a colonial situation (resolution 2065 (XX) 1965 of the General Assembly) and acknowledge the existence of a sovereignty dispute that must be solved through bilateral negotiations.

On this date, the Argentine people and Government reaffirm once again the imprescriptible and inalienable sovereignty rights of the Argentine Republic over the Malvinas Islands, South Georgias and South Sandwich Islands and the surrounding maritime areas.