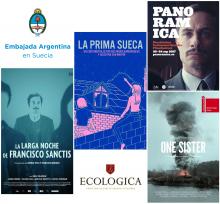 The Stockholm Latin American Film Festival "Panoramica" opens tomorrow its third edition with an interesting program whose purpose is to innovate the image of the Latin American communities and promoting its diversity within the Swedish cultural life.

One of the jury members of the festival is the Argentine producer, director and scriptwriter Juan Pablo Libossart, currently working as a documentary film consultant at the Swedish Film Institute.

On Saturday 23rd of September an Argentine program will be presented starting at 14.00 with the screening of the short film cycle which includes the Argentine short film "Swedish Cousin" by Inés María Barrionuevo and Agustina San Martín. At 15.30 will feature the film "One Sister" by the filmmakers Sofia Brockenshire and Verena Kuri. At 17.30 the film "The Long Night of Francisco Sanctis" by Francisco Márquez and Andrea Testa will be presented.

The Embassy of the Argentine Republic to the Kingdom of Sweden invites you to the tasting of Argentine wines "Ecologica" of La Rioja Saturday 32rd of September between 16:30 and 17:30 in Zita Folkets Bio, Birger Jarlsgatan 37 , Stockholm.